Bicycling-Magnificent-Myanmar was going to be a very different ride for us, as for the first time we would not be on our own. We met Kjell and his wife Andrea fleetingly in the Philippines in January, and had kept in touch by e-mail. When Kjell told us they planned to go to Burma in November and invited us to join them, we leapt at the chance. 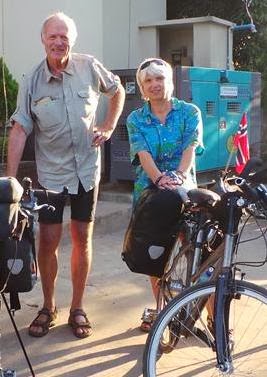 Getting the visa was the first trauma that we had to face. This would have to be done immediately after our return from Japan, in Manila. The Myanmar embassy is on the eighth floor of a nondescript old office block in Makati. You enter via a dark wood panelled hall and go into a poky waiting room with a table, a few chairs and a TV. On one side of the room is a small counter with a closed glass screen.

Woe betide anyone foolhardy enough to assume this is where to go for visa applications. Without any written or obvious information, each new customer has to learn that they must sit down in the waiting room and wait for someone to come in through the door from the back office to deal with them.

This usually means a wait of at least 40 minutes. Only then can you receive the application form. At the same time you will learn that the fee for a visa, U$40, and must be paid, in dollars, at a Chinese bank on the other side of Makati before the application will be accepted. So off we went to the bank and a frustrating search for a currency exchange.

Back at the Embassy we go through the same waiting process a second time and now have a receipt for the payment, a completed application form and the two passport photographs. But where, the official asks, is your digital disc of the photographs?  Luckily this could be done on the ground floor of the building, but once again, on return we had to wait 30 minutes to hand it in. By now it was nearly closing time on Thursday. Come back Monday afternoon we were told.

Monday afternoon we got a taxi to the embassy.

The doorman told us they are always closed on Monday afternoon. Tuesday morning we return.

Karen's visa is ready but Steve's photograph was not on the disc so we have to get another copy, three more thirty minute waits. By midday we at last have two visas. 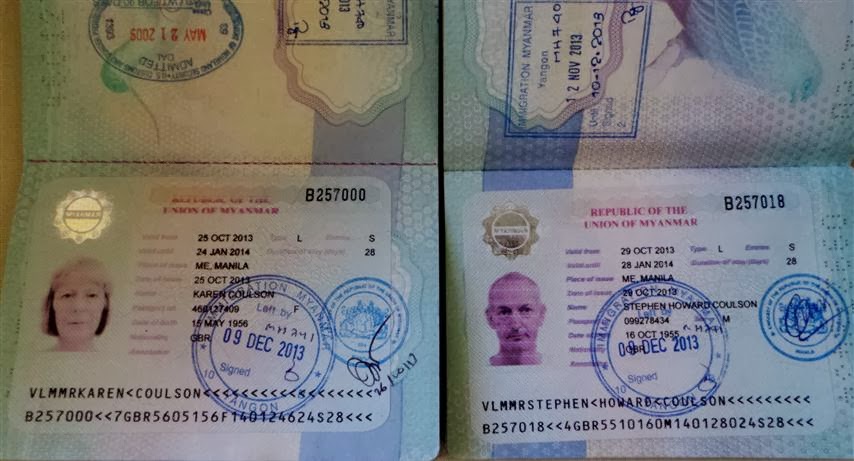 Our Visas are Finally Ready

The next challenge is getting US dollars which have to be in pristine condition, with no nicks, folds, tears or writing on them as hotels and money changers will refuse to accept them. With ATM's as rare as hen's teeth and nowhere that will accept plastic, that's a lot of clean dollars to source and carry around.

On the first attempt we forgot to check BOTH sides of the notes and found about ten of the US$100 bills had ink prints on them. These were swapped at another exchange but two replacements were pre-2006, also not acceptable. 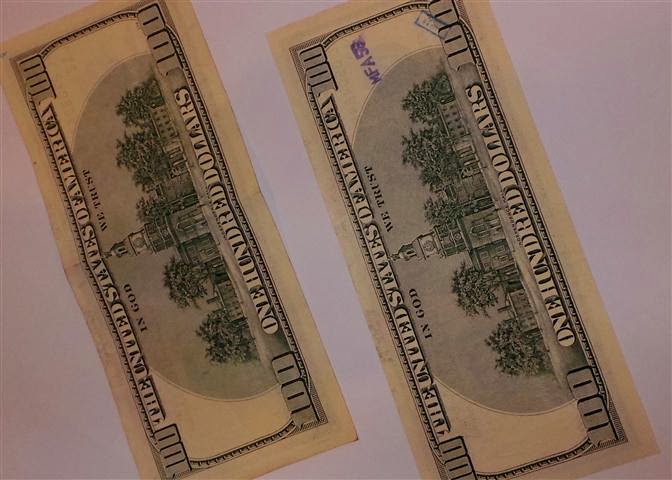 We had booked a return flight with Malaysian Airways via Kuala Lumpur to Yangon. It was cheap because there was a 12 hour stopover in KL on the outward flight. Our early afternoon flight out of Manila was cancelled and we were transferred to the evening flight, which was then delayed, so the stopover  time was reduced considerably.

Kuala Lumpur airport has a hotel, Sama Sama Express, within the Terminal One, with rooms bookable by the hour, so we had six hours sleep in a very quiet and comfortable room.

The second flight was straightforward and the bikes arrived with only a slightly bent mudguard. We had booked two nights at the Motherland Inn 2, which offers a free airport transfer and even though the bikes wouldn't fit into the mini-bus we weren't charged any extra for their separate carriage. We changed about a third of our dollars into Kyat at the airport at a good rate. This tip was thanks to Thorn Tree, the on line lonely Planet forum, which for such a fast changing country as Myanmar is a better source of up to date information than the printed guide.

The first thing that hits you on the journey into Yangon is that this country has predominately right hand drive cars, driving on the right side of the road, even though the change from left to right side driving was instigated in the early 60's. Motorcycles are banned from the city centre roads, making it much more peaceful than other Asian capitals. Bicycles are also rare in the capital, except for a few tricycle taxis, but we cycled around without problems.

The Motherland hostel is a fairly basic guesthouse but everywhere is very clean and the rooms on the upper floor are quiet, have private bathrooms and air conditioning. It is a really busy place, with guests arriving at all times of the day and night, an international mix of young backpackers and older couples. The staff are amazing, dealing with the ever changing guests requests and  enquiries, booking planes, boats and trains, and organising all this on paper, with a pencil and eraser.

Most accommodation in Myanmar advertises 'free wi fi' but in reality it is virtually impossible to do anything except send and receive e-mail on-line currently. Mobile phones are popular but getting a pay as you go SIM card here is still just a dream. This is all set to change within the next year as a Norwegian company promises to bring their communication into the 21st century.

This tour was a little unusual for us as we would be spending time in some "tourist" centres and only actually doing two cycle rides.

We flew into Yangon in the south of the main part of the country whereas Kjell and Andrea planned to fly into Mandalay in the centre of the country and some 700km due north of Yangon.

After a few days visiting Yangon it was a short flight from Yangon to He Ho airfield, about 30km north of Lake Inle and take a taxi to Lake Inle to meet up with Kjell and Andrea.

We would take time to cycle around and boat on Lake Inle as well as go to the Balloon Festival at Taunggyi which itself was a good two hour taxi ride away and an experience not to be missed.

It was a four day ride From Lake Inle to Bagan via Pindaya with a few days to visit the myriad of temples at Bagan and dine on the side of the famed Irrawaddy River.

A short flight back to Yangon airport to start the next stage of our ride from Bago to Mawlmyine.

Finally the rickety old train would take us back from Mawlamyine to Yangon and onwards to our next adventure.

Shwedagon Paya in north Yangon is the most important religious monument in Myanmar. Its enormous stupa, over 100m high, is covered in solid gold, reputed to weigh upwards of 60 tonnes and crowned with a jewel encrusted decorative top. 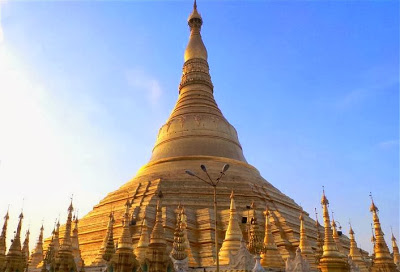 Four weeks in a country like Myanmar, where most tourist attractions are centred on religious sites, can test anyone's zeal for Buddha's, pagodas and stupas, but this one is really something special. 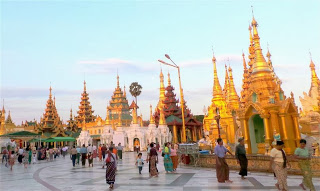 We arrived in the late afternoon, getting a taxi there in preference to cycling. It is impossible as a tourist to avoid paying  the government $5 but at least this entitles you to a ride in the lift up to the temple plaza. This is one of the most beautiful as well as most well tended temples that we visited. 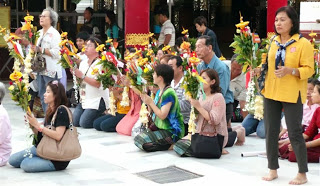 The floors are spotless and everywhere people are scrubbing, mopping and sweeping. As the sun was setting there was a cleaning ritual, with rows of women sweeping the floor followed by rows men with floor buffers.

The magic about the place was the intense and varied activity all around. Groups of tourists with guides, families, people bringing offerings and praying, monks meditating or climbing the stupa to add more gold. 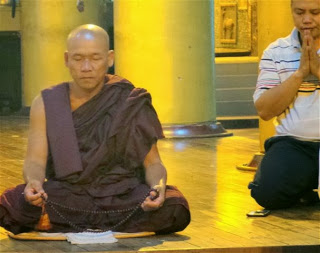 Around every corner was yet another small shrine with a group of people praying and lighting candles. Although it was noisy and crowded there was a reverential air about it all and we were compelled to sit quietly on the side and try to take it all in. 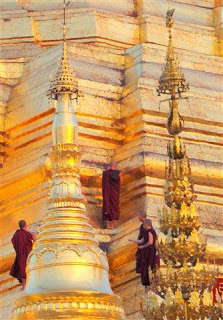 As the sun set the gold stupa glowed and then once darkness fell it was illuminated by spotlights, contrasting with the star filled sky above.

For a fitting finale to a memorable evening we went to  'Monsoon ' restaurant, for a wonderful meal. Traditional Eastern food served to Western standards in a beautiful, air conditioned, restored colonial building. 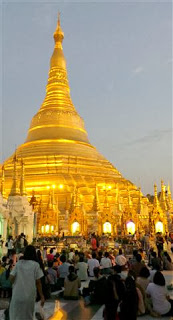 For our final full day we caught the ferry from the jetty on Strand Road to Dalah, on the opposite side of the Yangon River. This is a very busy ferry crossing and it was difficult getting the bikes down the crowded jetty and lifting them onto the boat in the great crush of people. 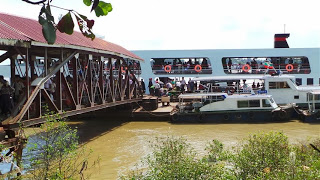 Once on the boat we attracted a small crowd of interested locals who examined our bikes in detail. Although there are few bikes of this quality in Burma they quickly spotted the unusual features, the SIS couplings and the Rohloff  hub and bombarded Steve with questions about them. 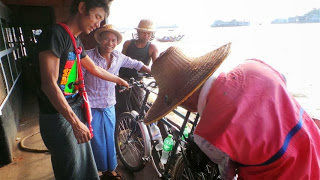 Fascinated with our Bikes

Getting off the ferry on the other side was even more of a crush, with all the passengers funnelling into a narrow street lined on both side with motorcycle taxis and pedicabs.

Escaping the melee we set off down the road towards Twante. This delta area was very badly damaged by the cyclone in 2009 and has only recently been freely opened to tourists, without having to obtain a permit.

Parts of the road are in an extremely poor state of repair and made the ride tiring and there was little to delight the eye, few villages and even fewer people. The highlight of the 60km day was the river ferry crossing. 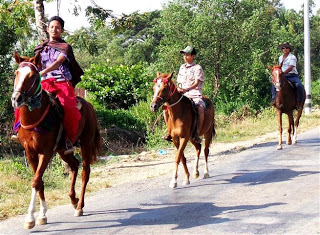