Our ride descriptions give an account of the ride that we completed. As part of the description we also provide links to Wikiloc or Google maps and elevation profiles based on mapping data available through the internet. The ride profiles are smoothed to give what in our opinion is a more beneficial view of the profile. We use paper maps, GPS and on line data to plan and conduct our rides. We are happy for you to use our descriptions, but be aware that we do not guarantee the accuracy of the information provided as situations surrounding any ride change over time.

On this, our first full cycling day, it was unfortunate that both of the ladies were unwell. Karen just had a cold, but Andrea had a bad stomach upset and had hardly slept. There was about 10km of flat road to warm up on and get used to riding in convoy before the first hill. 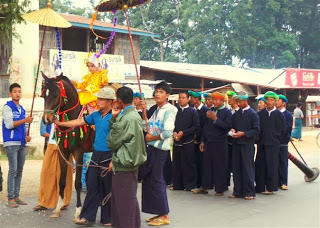 In one of the small villages was a parade. At the back were two ponies each carrying a young boy about four years old. In front of them was a long column of villagers led by a group of dancers, musicians, drummers and gift bearers, all dressed in traditional costume. 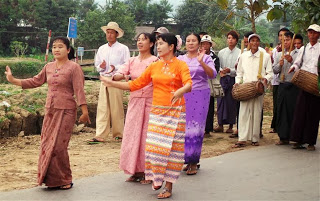 At Schwenyuang we joined highway 4 and turned west. The road was very busy, with throngs of balloon festival visitors travelling home. Later we

learned that today was a public holiday. 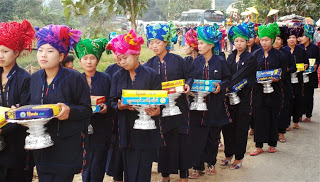 Between here and He Ho was a slow climb of 450m up to the plateau where the airport is. Clouds were gathering above and there was a brief shower, hardly enough to wet us.

Traffic in front ground to a halt as the level crossing gates were closed and everyone waited for the train to Thazi to trundle slowly over the road. 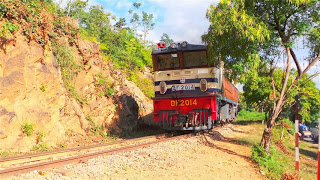 The slow train to Thazi

The railway climbs close to the road, circling through  360 degrees to gain height. 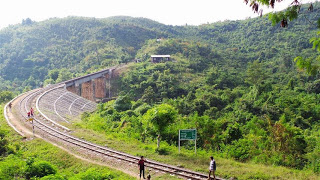 Further up the hill there was a good view of the heavy rainstorm making its way over the lake. Stopping to take a photo we were joined by a group of young men, riding home from the balloon festival, who all wanted to have their pictures taken with us. 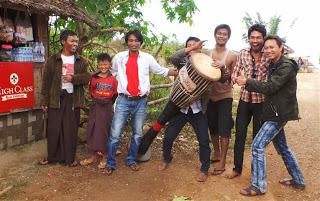 The lads on their way home from Taunggy

At a cafe at the summit we caught up with them again and they brought us all coffee. Steve was persuaded to try playing a traditional drum. 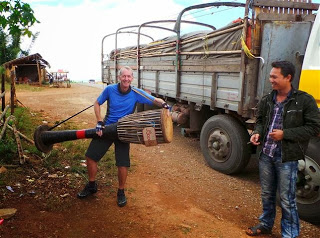 Steve could hardly lift the drum let alone play it.

Now on the plateau at about 1300m, the road was fairly flat all the way to Aungpan. At a small parasol workshop we gatecrashed a tour party's demonstration of traditional umbrella making before stopping for lunch at a  roadside eating place 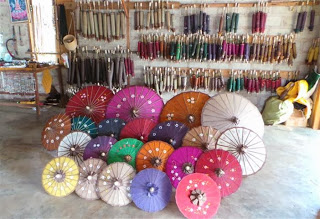 By 2.30pm we were in Aungpan where we planned to overnight. The following day we would take a day trip to Pindaya to visit the  cave temple, a round trip of 80km. As it was still early we decided we could ride the 40km to Pindaya before sunset. 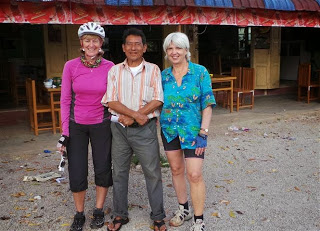 A tour guide had recommended the ride along the NR 41 as very scenic. It was, but because of the public holiday everyone had decided to take a trip to Pindaya.

Heading home at the end of a hard day in the fields.

The narrow, poorly surfaced road was nose to tail with buses and vans full of locals on their way to, or home from, the Pagoda. Constant horn blasting and the necessity to regularly swing onto the unsurfaced hard shoulder to avoid the impatient buses was wearing. 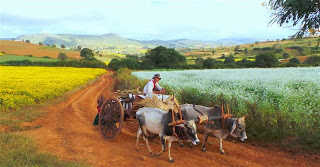 The road was a tiring roller-coaster with repeated climbs and ascents. The compensation was the breathtaking views across the countryside with its multicoloured fields of crops. As the sun descended the warm light gave everything a magic glow.

In the fields groups of farmers were threshing, loading the straw onto ox-carts which plodded across the road, forcing the other traffic to slow down. 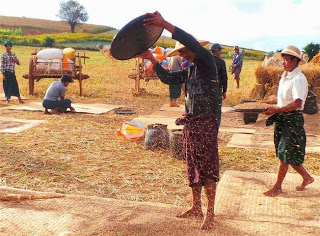 There were so many photo opportunities we didn't arrive in Pindaya until after dark, riding into the town on an unsurfaced, unlit, rough downhill track. We stayed at the Golden Cave hotel which had bungalow style rooms with small covered terraces, ideal for the bikes. 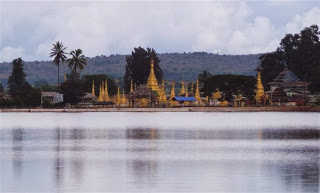 It rained very heavily just before dawn. The noise of the rain on the corrugated iron roof of our room meant we were awake in good time for breakfast. Afterwards we rode up to the Schwe Oo Min cave pagoda. Even at  8.30am there were  already a few buses full of local pilgrims there. A steep, long climb flight of steps led up to the cave and shoes had to be removed half way up. 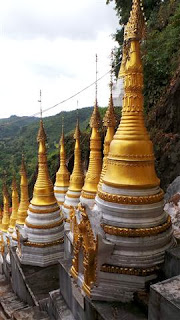 There are several large, interconnecting caves, all stuffed full of gold  Buddhas of all shapes and sizes. There are so many that only very narrow walkways remained to get through the caves. 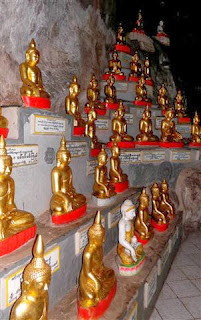 It took about thirty minutes to reach the limit of the caves and we turned back to return to the entrance.

By now masses of other people had arrived and the narrow passages between the Buddhas were packed with people. It was a battle to make any progress. The local women used their elbows and knees to push their way through the throng. At last, with great relief, we emerged back into the fresh air. 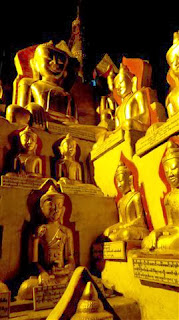 We had to go back to the hotel to pick up luggage and then wait for another very heavy rainstorm to pass before setting off about 11am. The return journey to Aungpan was more enjoyable because of the quieter road and the fact that the long painful uphills of the day before were easy coasting downs. 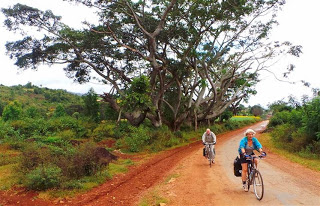 Riding Back From Pindaya

Today, instead of threshing,  the farmers were harvesting cabbages,  arriving at laybys with ox-carts full of cabbages to be loaded onto lorries. Kjell and Andrea got left behind to taking  photos and caught up with us at lunchtime. 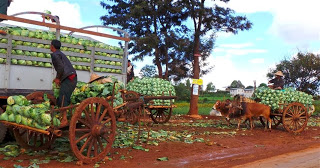 After lunch it was just another 7km to Kalaw where we had booked rooms at the  'Eastern Paradise Hotel' It didn't live up to its name being a bit shabby and old but it was quiet.

There was an Internet cafe round the corner where we profiled the  next day's ride. Andrea still not able to eat and feeling very weak so even with a good portion of downhill, tomorrow's ride of 115km was daunting.

For dinner we tried a restaurant recommended by LP for its Myanmar food. They only had Chinese dishes. 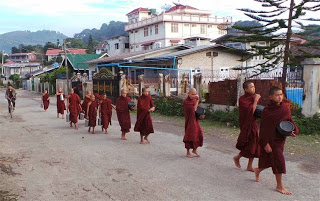 The official hotel breakfast start was 7am so we asked to have ours at 6.30am. It seemed every other guest had also asked for an early breakfast. By 7am we were on highway 4, with a short gentle ascent before the road started to drop into a deep valley. 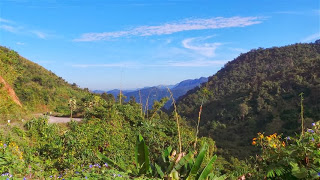 The view from the top of Highway 4

At the top of the hill they were building a new toll gate but it wasn't clear whether the toll road would be this one or a new build. The temperature at 1,300m was cool and pleasant and the views from the top across the small forest reserve were beautiful. 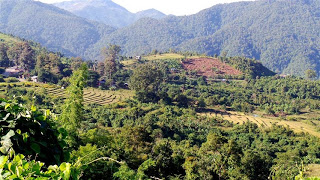 The road tumbles down the steep sided valley through many hairpins, with smooth tarmac and the traffic was light.  We were afraid that there would be many lorries carrying agricultural produce but there was mostly small buses and motorbikes. 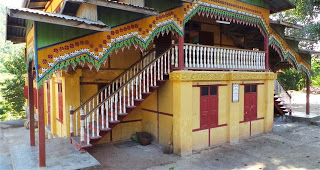 Within 30 minutes Karen needed some bike maintenance to fix a squealing brake and not long after Steve had a puncture. These delays meant that Kjell and Adrea went on ahead and it was a while before we all met up again. As the road descended the temperature rose steadily and the sun was intense.

The road now began a slow ascent up a small tributary valley. Teams of workers, mostly women were filling potholes with small stones by hand and making tar to surface them by boiling oil over wood fires. The men were climbing a rocky cliff with just ropes and no protective clothing while their children playing happily below them. 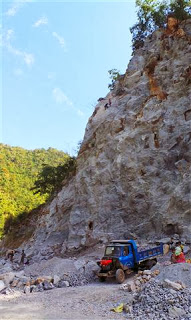 A  military pickup truck passed us with three young soldiers sitting in back. Pulling up ahead of us, and an older officer jumped out of the drivers seat and approached us. We thought we were in trouble. Instead he handed us a large bag of oranges to eat. 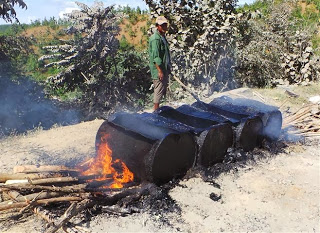 We decided to wait for Kjell and Andrea so we could share with them. So we headed to the shade of a roadside tree. Four women already sat there in the shade. They found us a blanket to sit on and we shared our oranges with them.

Kjell and Andrea  still hadn't arrived after twenty minutes so we assumed they were trying to find a lift. We continued to next town and stopped for lunch but they still they didn't catch up. Ten kilometres further we stopped again for a drink and a minivan with two bikes on the roof went past, stopped and reversed. It was another 45km to Meiktila and gone 3pm so we added our two bikes to the van and jumped into the air-con cab.

The Honey Hotel was on the side of the lake but a disappointingly scruffy place, which didn't exploit it's wonderful views. We sat on the little patio, which would have had good views over the water without the high wall, and asked for a beer. They had none, so one of the staff went off on his motorbike to buy a single bottle. When we wanted a refill he had to go again!  Just around the corner was a surprisingly modern Thai restaurant with very good food.

As the crow flies, Bagan is just 70km north west of Meiktila. But as there is no direct road, the two options are to go north to Myingyan and stay overnight at a very basic guesthouse or go due east towards Chauk, on the Ayeyarwady river, and overnight at Mount Popa at an over priced government owned hotel. It had also been suggested to us  that this road may be closed to tourists due to Muslim unrest. 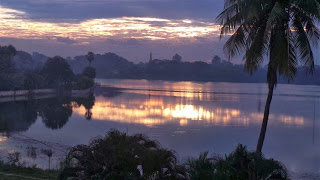 The best option appeared to be to get a bus to Bagan, and there was one at 11am. So after breakfast at 6.30am we had a couple of hours to spare. We explored around the lake where there was a large duck shaped floating pagoda, and had a drink at a tea house near the market. 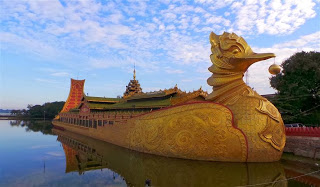 Meiktila was the sight of one of the most decisive Burma battles of WW2 and a large number of Japanese soldiers lost their lives here. On the far side of the lake is a monastery with a monument in memory of these soldiers. 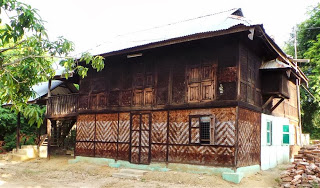 It wasn't difficult to find the monastery but early in the morning there were very few monks around and we wandered through the many buildings in vain. Eventually a young boy led us to the small, unkempt and uninformative memorial. Myanmar does not seem keen to remember or commemorate the sacrifices of WW2. 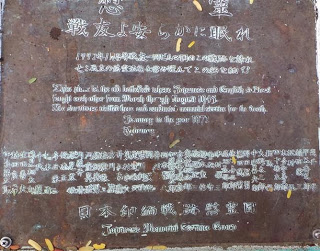 Back at the hotel  Kjell had investigated the cost of getting the four of us and our bikes on the bus to Bagan and decided it would be just as cheap to hire a van. The only problem was that the van didn't have any seats.

We loaded and secured the bikes in the back and then borrowed a few cushions and mats from the hotel to sit on. Kjell, as senior party member, got to sit in the cab with the driver.

The ride was enjoyable through poor and remote villages along a smoothly tarmacked road with hardly any traffic. Three Europeans in the back of a van couldn't pass unnoticed and we attracted a lot of attention, particularly from the children as they walked home from school for lunch. 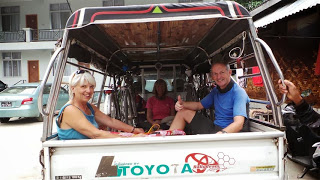 On the outskirts of Bagan we passed the first of the 1,000's of temples for which this area is so famous and we had travelled so far to experience. 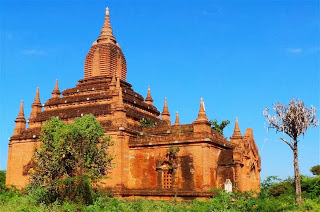 One of the many Bagan Temples