The main reason for starting the tour at Lake Inle in the middle of November was to experience the Fire Balloon Festival. This is held on the outskirts of Taunggyi, about 15km east of Nyaungshwe, at the time of the full moon which this year was November 17th.

We hired a taxi for the evening, leaving the hotel about 5.30pm. On the road to Taunggyi it seemed like the whole population of central Myanmar was on a pilgrimage to the festival. Every available form of transport was filled to capacity and beyond with passengers. Cars, taxis, buses, lorries, vans, motorbikes, with people sat on the roof, clinging to the back steps, hanging onto the sides.

There is a long hill up to the town, about 600m of climb, slowing the heavy laden vehicles to a crawl. The faster moving motorbikes wove their way through the vehicles, from left side to right and the whole width of the narrow road was filled with climbing traffic. Luckily nobody wanted to go downhill. The problems were compounded by many vehicles pulling in for 'comfort stops'  or simply to allow overheated engines to cool.

From the outskirts of Taunggyi it was another hour of slow crawling to the festival grounds.  Our young driver turned down into arena area and we wondered where on earth he would be able to park. Several officials tried to turn him back but he was insistent and drove into the VIP area, where he got the last parking place. He shepherded us  a couple of hundred yards through the crowds to a covered stand reserved for foreigners, complete with a security guard.  We later realised that the roof was to protect us from falling debris.  We joined about two dozen other international tourists, mostly in small groups with guides.

The event was not quite what we had expected:  serenity, stillness, large numbers of small paper balloons floating into the night sky. Instead there was a huge arena, packed with local young males, many very drunk, chanting and dancing.

Around this were hundreds of food and drink stalls and a large fairground. The temple was lit up like Blackpool illuminations. 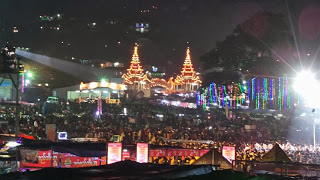 The temple and arena

A huge paper balloon was carried into the arena with much ceremony and then inflated with hot air from a brazier. Once it was fully inflated a huge wooden crate was attached, containing fireworks to be ignited once the balloon was high in the sky. 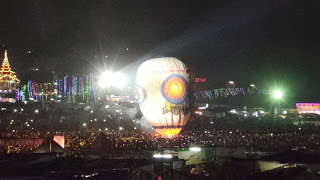 This first  one rose up about 200m and then the edge of the balloon caught fire. A small panic reaction rippled through the crowd below as the flames engulfed the whole balloon, and within about a minute it started to plummet back to earth, propelled by the weight of the fireworks.

It landed and exploded into a huge fireball, all the rockets igniting  simultaneously. A fire engine quickly dowsed the flames and we were assured that there were no casualties but it was difficult to imagine given how crowded the arena was, and the intensity of the explosion, with  rockets firing off in all directions, that that could be true. 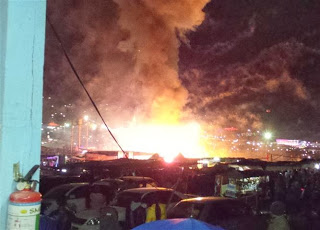 Over the next three hours, four more balloons went up without incident, producing  lovely showers of fireworks from very high in the sky. At midnight we decided to leave, to avoid getting held up in long queues of departing traffic later on. According to the guides there were still ten more balloons to go up. 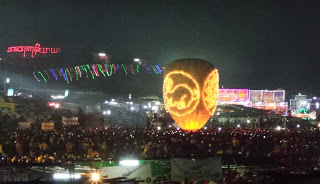 When it was time to go home we went in search of our taxi. Our enterprising young taxi driver had rented out the boot of his estate car to a family to sit and watch the show. They had to sit on the ground for the rest of the night.

Return to our Tours page