The ride from Dunedin through the Otago region to Mount Cook takes in a very different cross section of scenery. Leaving the coast we traveled through agricultural plains, along gorges, passed fascinating hydro electric systems and up to the compelling mountains and glaciers.  Here we cover the section from Lake Ohau up to Mount Cook and then continuing to Methven in  Canterbury county.

Our ride descriptions give an account of the ride that we completed. As part of the description we also provide links to Wikiloc or Google maps and elevation profiles based on mapping data available through the internet. The ride profiles are smoothed to give what in our opinion is a more beneficial view of the profile. We use paper maps, GPS and on line data to plan and conduct our rides. We are happy for you to use our descriptions, but be aware that we do not guarantee the accuracy of the information provided as situations surrounding any ride change over time.

Wow, what a day!!! an 'everything was easy' day. During the night we were woken several times by showers of rain, gusting winds and a small creature feasting on our loaf of bread. Looking out of the tent there was an obvious change of wind direction. Overnight it had turned through almost 180 degrees so it would be uphill into the wind yet again. The other problem was that we would have to retrace our pedal strokes 17.5km back to Highway 8, a thing we always hate to have to do. 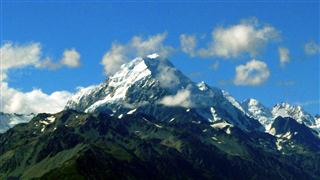 The map showed a track which ran along the lakeshore to the east, joining up with a gravel road into Twizel which would save going up the hill. Unfortunately it was gated and the gate was padlocked.

Setting off up the hill it was surprisingly easy, even with the moderate head wind. As often happens there were a lot more flat and downhill parts than we remembered and it took us less than an hour to get back to the main road.

As we turned North towards Twizel the strong southerly pushed the bikes along and a gentle downhill had us sailing along at up to 30km/h with hardly any effort. There is a wide flat valley floor here but all around us were mountains. We got into Twizel by 11am and were relieved to find an ATM, the first for three days. This town was built in the 1960's to house the construction workers for the hydro-electric scheme. It was due to be demolished once that work was completed, but has now become a thriving and developing town.

The town centre was busy with some sort of 'event'. Apparently the plan had been to hold a wine festival, but not enough wine producers had been interested so the local businesses had decided to do their own thing. There was music and various stalls but everyone was in coats and scarves as it was freezing cold.

Setting off again we still had the wind at our heels as we crossed the wide Pukaki to Ohau canal then turned left onto highway 80 to Mount Cook Village. Our guide book warned us that the prevailing wind was north westerly and the ride up the valley could be difficult but today it just carried on pushing and instead we felt sorry for the five touring cyclist who passed us in the opposite direction, all struggling into the head wind.

The road undulates along the edge of Lake Pukaki, giving fantastic views up the valley with Mount Cook at the top. The summit was partially obscured by clouds but these slowly cleared to reveal the snow topped peak in all its glory. 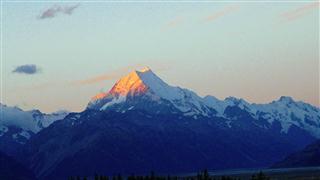 We decided to camp at Glen Tanner, about 20km south of Mount cook Village as the camp site had electricity and showers as well as a bar and cafe. In the morning we would ride up to the top of the road and walk to the Tasman Glacier. As the sun set about 9.30pm the snow capped summit turned pink against the clear blue sky.

The wind had increased overnight and the cloud was low over the mountains. One of the cyclists on the camp site had decided to cycle up to Mount Cook and left the site early. We were away by about 9-00am, but we had gone no further than 1km when we decided that the wind was just too strong and we turned back.

We spent of the rest of the day updating blog and doing our chores.

Later that afternoon the other cyclist returned having had a very tiring and fruitless ride to Mount Cook Village. 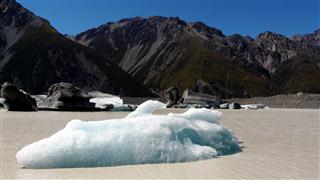 As we sat in the service center drinking a beer, we learned that another cyclist had arrived.

That evening we chatted with Declan. He had quit his teaching job in the UK and rented out his house to travel the World by bike.

During the night the tent was buffeted by gale force winds and heavy rain. Despite this we managed to stay dry, but got very little sleep.

Come the morning the wind had dropped and the weather had improved. Along with Declan, we managed to get a lift from a Swiss guy called Roland, up to Mount Cook Village. Roland had travelled extensively by bicycle and we learned a lot from him during the short time we talked.

The day improved as it wore on. Roland drove us up to the Tasman Glacier and the terminal lake at its base. It was amazing to see icebergs floating in the lake. Some of them must have been 100 metres long and 30 metres high (above the water). 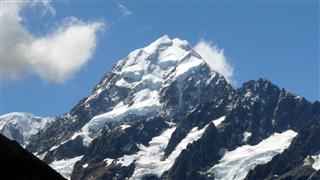 As we climbed the hill to overlook the lake we didn't realise at first that we were actually looking at a glacier. The surface was black, covered with moraine. It was staggering to read that where we stood, the glacier had towered 700 metres above us only 14,000 years ago and that Lake Pukaki was the result of an earlier terminal lake at that time.

Later we drove up to the Hooker Valley and had great views of Mount Cook up close. The mountain looked like the face of father Christmas formed in the snow.

We walked up to Kea point and to the edge of the valley formed by the glacier. The wind was up again and was so strong that it was almost blowing us backwards as we walked. 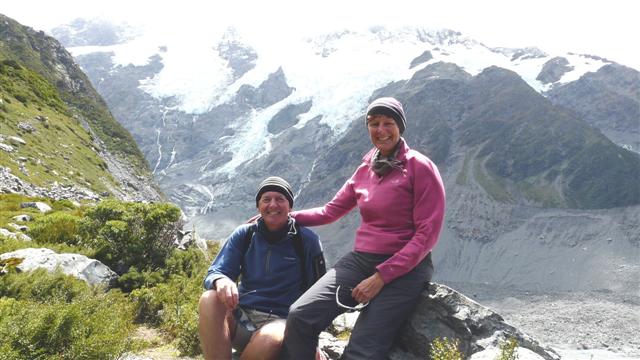 We had lost sight of Roland by now, so walked back to the Old Mountaineer's Cafe at the village. There we scanned a copy of the book by Mary Hobbs about her and Charlie, her husband's fight to open the cafe at Mount Cook Village and made a mental note to get an electronic copy.

A Korean lady gave us a lift back to Glen Tanner and that night as we were out of food we had to eat in the restaurant. Its a hard life.

We learned that Declan was going to stay on for a few more days and cycle up to Mount Cook the next day, but for us it was time to move on.

The 'Pedallers Paradise' book says that there is often a strong north westerly to blow you back down the hill from Mount Cook. It won't be a surprise to any of you keen cyclists to learn that in fact there was a strong southerly, but we're used to headwinds. It was a lovely ride down the west shore of Lake Pukaki, turning east onto highway 8 which continues along it's south shore.

There is a large lay-by here where all the tour buses stop to allow their passengers to take the iconic photo of Mount Cook at the top of the lake.

After only 8km on the highway we turned off again to continue up the east side of the lake, a total of 45km around the lake shore. We were heading for the canal, part of the hydo-electric power scheme, which runs from Lake Tekapo to Lake Pukaki. There is a tarmac road all the way along this canal that used to be open to the public, but for some reason it has been closed. Other cyclists had told us to by-pass the gates and ignore all the signs saying no walkers or cyclists.

There was a steep hill to start with until we reached the canal. It was a surprise to see a lot of campervans parked on the opposite side of the canal. We wondered what attracted all these people to park here when there were so many more picturesque camping areas. Then we saw a guy with a fishing rod washing an enormous salmon. Just up the canal was a large salmon farm and the campers come to catch the escapees.

The road along the canal was flat but being at about 700m elevation it was very exposed. Crossing one of the saddles the side wind was so strong, it was as much as we could do to keep the bikes on the road. Thank goodness there was no traffic and it was blowing us away from the water.

The canal twists and turns a lot so we had variable winds, sometimes in our faces, sometimes at our tails. We had to negotiate three more locked gates, all telling us we shouldn't be there, but we ignored them.

Arriving in Lake Tekapo village, we decided it was about time we had a night in a real bed. After a fruitless search for cheap accommodation we went to the camp site and put up the tent.

Today the route was generally downhill on Highway 8, dropping about 600m in 90km. It was a fine but cloudy day. Of course it wasn't all downhill, there were a few short steep climbs, but at least the wind was behind us. After crossing Burke's Pass at 709m we then dropped down quickly to Fairlie. Having done 43km in 2 hours we decided we could easily get to Geraldine and decided to ring ahead and book a bed in a hostel after the disappointment of last night.

Of course, once we set off, we realised that the road turned north east and into the wind. We pushed on hard and, except for a late lunch at Happy Valley, didn't stop again till Geraldine. The hostel was in a converted maternity hospital and very quiet. Needless to say we slept very well. 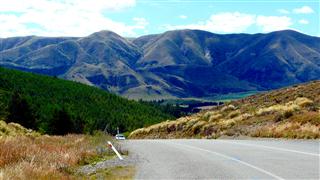 We were now on the Canterbury Plains so today's ride was across flat agricultural areas, mostly cattle and sheep with a few cereal crops. The road was long and straight and very boring. It was a relief to get to Methven.

Link Back to our Tours Page from Mount Cook